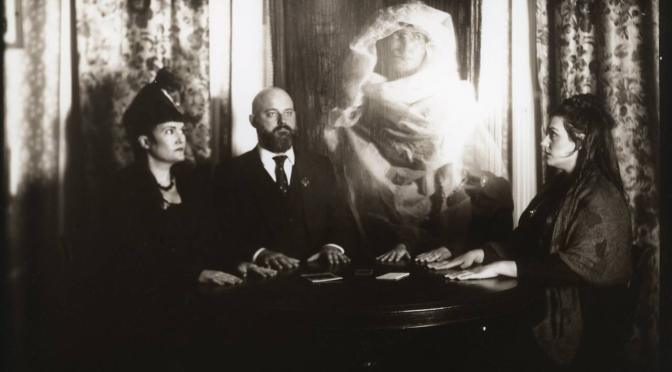 Last October 2021, we gathered some friends, historians, a museum curator, and fellow spectrophiles to run an experiment at the Museum of the Home in London. We wanted to see if we could recreate spirit photographs using historically accurate Victorian methods.

This post contains three parts. First, a short history of spirit photography. Second, an interview with our photographer Selina Mayer. And finally, our Spirit Photography Album with the outcomes of the experiment.

***If you want to skip straight to our Spirit Photography Album first, scroll to the bottom of this post.***

The first camera was invented in 1816, but capturing images that would stay was a problem. Experiments with fixatives led to the first official (known) photograph to be from 1825. Experimentation was integral to the process of early photography and by the 1850s photographers were exploring methods such as stereoscopic images (pictures that look 3D when you look into a viewing box) and double exposures.

In America, an amateur photogpher named William Mumler is thought to have captured the first spirit photograph—at any rate he was the first one to make a business out of it.

The photography boom of the 1860s coincided with the American Civil War. Deaths in the family, already commonplace in the 19th century, then skyrocketed to unbearable numbers. Not surprisingly, it was this heightened death toll that also led to birth of Spiritualism.

(For more about the history of Spiritualism, I wrote an audio walk through Bloomsbury in London—the birthplace of British Spiritualism—which you can listen to here.)

Mumler discovered that grief could be big business. He was eventually put on trial for fraud (with no less a personage than PT Barnum testifying against him) and was eventually acquitted, although his career as a spirit photographer was over.

But the spirit was already out of the grave. (har har) Spectral photographs became very popular in both the U.S. and UK. The ‘Ghost Club’ was founded in London in 1862 where, among other paranormal investigations, they analysed spirit photographs.

Spirit photography remained popular throughout the end of the 19th century, but gained new ‘life’ with the (once again) staggering death tolls of World War I.

But not all spirit photography was crafted with skill to mislead. There are countless websites even today with people sharing their own spirit photographs that they didn’t create on purpose. Nowadays most of us have digital cameras, but they can play tricks on us that are as interesting as their film camera cousins.

Sometimes plain mistakes can lead to some pretty spooky outcomes. I remember a trip I took to Las Vegas when I was 19 years old. I took my film camera with me and when I developed the film I ended up with a photo of me sitting on my hotel bed with my deceased grandmother sitting next to me. I was utterly shocked, she had died four years previously and I missed her very much.

What had happened was the film had not rolled all the way back into the roll when the last photo was taken, so I thought it was a new roll and reused it for my trip. The roll was apparently used before to take photos of a holiday gathering at my grandaunt’s house. The uncanny success of this particular photo was that the chair my grandmother had been seated upon exactly matched up with the height and angle of the bed, so she did appear to be sitting right next to me.

Even though I know the how and the why, it doesn’t take away from the eeriness of this photograph. And I’m tickled by the idea of my grandmother taking a cheeky posthumous trip to Las Vegas.

Among its galleries and collections, one of my favourite parts of the Museum of the Home are its period rooms. These are parlours dressed with historical objects to appear as they were through time, ranging from 1630 all the way up to 1998.

The 1870s room is dressed for a séance and is my absolute favourite—surprise surprise!

Early last year, I took the photo below of the 1870s room, and it came out looking like a ghost had flown right past me:

Joking around online with some friends about my ‘ghost’, death historian and model Rébecca Pointeau mentioned that she was putting together a project to historically recreated spirit photography—and our séance room would be the perfect place to do it. The photographer working with her on this project had purchase an antique camera to experiment with, which just happened to be from the 1870s—the same era as the Museum of the Home’s séance room. Serendipity and a sneaky photo-bombing ghost did their magic and the project was on its way…

I asked our historical photographer Selina Mayer about the process and experience of working with a camera from the 1870s:

Romany Reagan: Can you describe the camera that you used and the process of using the camera as originally designed?

Selina Mayer: The camera used is a Victorian Half-Plate camera, which was originally used for both the wet-plate and dry-plate processes. Wet plates are sheets of glass that are coated with light-sensitive emulsion immediately prior to the photograph being taken, and have to be developed within 10 minutes (i.e. while the plate is still ‘wet’). Dry plates (which is what we used for this series) use a slightly different light sensitive emulsion that can be coated and dried in advance and then processed at a later date. Dry plates allowed for the mass production of plates for photography for the first time, so opened up photography as an activity to a much broader range of people as you no longer needed  as much specialist knowledge.

In order to take a photograph using a plate camera you must frame and focus your image first, using the ground glass at the back of the camera, which has an upside-down and reflected image from the lens. Then (in darkness) you load a light sensitive plate into a darkslide, a device that slots into the back of the camera and protects the plate from light until you’re ready to take the photograph.

At the time photographic lenses and shutters were separate and most shutters from the period are difficult to find fully functioning because of their mechanical nature, so when I use this camera I use it without a shutter, taking the photograph by removing the lens cap and manually counting the seconds of exposure before replacing the lens cap.

RR: In what way was this standard process altered to create the spirit photography images?

SM: I still used this process when making the spirit photos, with a few early special effects techniques thrown in. Most of the transparent, ghostly figures were created using multiple exposures, i.e. shooting several images onto the same plate, usually blacking out the area during the second and/or third exposures so you don’t expose the background twice, but I also made use of moving objects during the long exposures, using a fault in one of the darkslides to great floating beams of light, or using very thin thread to make an object ‘float’. I then made prints in the darkroom and used further manipulation techniques (known as ‘dodging and burning’) to make some parts of the final images lighter or darker

RR: Were there any surprising or unexpected moments during this spirit photography project?

SM: I think the entire process was something of a jump into the unknown! Using analogue processes means that you can’t see the result immediately, which is challenging in and of itself, but then throw in the fact that we were in a location I’d never been in before, using manual techniques that can’t fully be predicted, meant that every plate was a leap of faith. One of the delights of working with such old, analogue processes and techniques however is that it allows for ‘happy accidents’ to occur—the funny quirks of the processes that you didn’t anticipate but end up falling in love with—which definitely happened during this project and just made the final images more special because of their uniqueness.

While researching which spirit photography techniques to reproduce, we found several source images that were our focus for the experiment. Our Victorian inspiration images are on the lefthand side. The photos we created are on the righthand side.