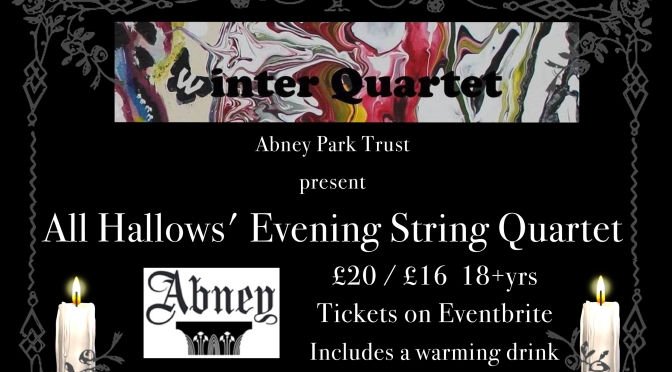 Abney Park Trust are excited to announce that The Winter Quartet will be playing a All Hallows’ Eve concert at Abney Park within the chapel. They’ll be performing some wonderful, spirited, and atmospherically thematic tunes that will be familiar to the listener, by well-known classical composers, brought to life in this performance recital. They will take you on a musical journey, exploring our fear of the unknown and our own personal demons through fantasy. Stories of mountain kings, castles, dances of marionettes, and spirits emerge as the melodies becoming more regal and majestic. The mood lightening as the dances take on a major key for a celebration before our final moment of clarity and salvation.

The Winter Quartet are part of The Parlour Room, a collective of players who have a long history of not only playing classical music for functions and orchestras, but also for rock and folk bands, art and theatre shows – including writing parts and improvising.

From Mozart to Radiohead, The Winter Quartet have worked on unusual projects adapting their sound and look to suit the occasion. They have performed at charity events, weddings, nightclubs and worked with performance artists and musicians such as Estelle Riviere, Martina Topley-Bird, Queens of The Stone Age, Red, and IAMX.

Important note: This event will be held in our grade II listed historic chapel, which at this stage of rennovation does not have windows or doors. Pleas dress warmly!
Seated Tickets:
Full – £20
Conc – £16
…with a complimentary warm drink

Please arrive at 7.30pm at the main gates on Stoke Newington High St.
Latecomers will not be admitted.

Sarah de Winter is a cellist and soprano, studied music and theatre at Brunel and Royal Holloway universities. As well as working as an arts administrator and producer, she has continued to play cello, playing for bands (live and recording sessions), theatre shows, pit work for musicals, functions and art openings and for high standard amateur orchestras.

Martin Ash is a London-based freelance violist and violinist (and arranger, and other things!). His musical interests span from folk and rock to orchestral playing, chamber music, pit band work and recording sessions. Besides freelance work, he performs regularly with rock bands Kindred Spirit and The Filthy Spectacula (on electric violin) and Baroque consort La Folie. He has an ATCL performance diploma in viola from Trinity College.

Aurora Del Río Pérez was born in Madrid and her passion for violin began when she was seven years old. She studied for a Bachelors degree in music (with speciality in violin) at the Conservatory of Music of Córdoba, Spain, and CODARTS, Music School in Rotterdam. Her violin tuition has included attending many music seminaries receiving lesson from world renowned violinists, Sergey Teslia, Isel Rodríguez, David Russel, András Czifra, Ara Malikian, Michel Thomas AND Pedro Gandía.

In the professional field, she has played with many national and international orchestras such as New International Symphony Orchestra, Codarts Symphony Orchestra, Orquesta de Cámara Ciudad de Toledo and Orquesta Filarmonía de Madrid, as well as several string quartets. She was principal violin in a piano trio ‘Fantasy Trio’, regularly performing in Rotterdam. At present Aurora is based in London where she plays with a pianist in the ‘Aisse duo’, and the Winter Quartet.

She is involved in the development of two new musicals, Little Mermaid and The Wicker Husband. She has been involved with The Parlour Room since it was founded, and also plays regularly with the LMO. She is currently in rehearsals for the West End transfer of The Grinning Man, which opens at Trafalgar Studios in December.

I'm delighted to announce my #HauntedBloomsbury audio tour is now available through @antique_beat and @acuriousinvitation 's new project #LondonCityoftheDead including a glossy guidebook and map! 🎙️🔮👻
I feel like this excellent shop belongs in New Orleans. 🧐 In a good way. 😂
You know you're of a certain generation when your mind completes the sentence "Be kind, please rewind" 😂
Dramatic Easter morning photoshoot with my Easter basket! Very impressed with the outcome this year. Top colour game – #nofilter 😮 Happy chocolate and champagne day everyone! 🐇🥚🍫🥂
So... I was dying some clothes black and there was apparently a hole in my rubber gloves, so I've ended up with this epic corpse manicure! It's very 50s flick zombie horror. I'm kinda into it... 🧟‍♀️⚰️🎥
What a delicious day we have ahead! The tea is hot, the vodka is chilling for later, and the knitting is ready. Let the #RuralGothic bacchanal begin! 🍂🍃🪕🔪