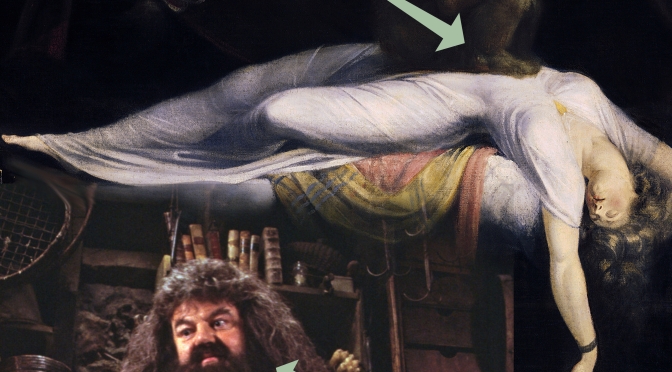 In previous centuries nightmares were believed by some to be caused by supernatural beings. The medical condition sleep paralysis was blamed on witches It was described as being witch-ridden or hagridden – a term referenced by J.K. Rowling for the beloved character Hagrid in Harry Potter The experience is accompanied by a feeling of weight on the chest and hallucinations, which gave rise to the notion of pressing demons such as the incubus and succubus.

I'm delighted to announce my #HauntedBloomsbury audio tour is now available through @antique_beat and @acuriousinvitation 's new project #LondonCityoftheDead including a glossy guidebook and map! 🎙️🔮👻
I feel like this excellent shop belongs in New Orleans. 🧐 In a good way. 😂
You know you're of a certain generation when your mind completes the sentence "Be kind, please rewind" 😂
Dramatic Easter morning photoshoot with my Easter basket! Very impressed with the outcome this year. Top colour game – #nofilter 😮 Happy chocolate and champagne day everyone! 🐇🥚🍫🥂
So... I was dying some clothes black and there was apparently a hole in my rubber gloves, so I've ended up with this epic corpse manicure! It's very 50s flick zombie horror. I'm kinda into it... 🧟‍♀️⚰️🎥
What a delicious day we have ahead! The tea is hot, the vodka is chilling for later, and the knitting is ready. Let the #RuralGothic bacchanal begin! 🍂🍃🪕🔪