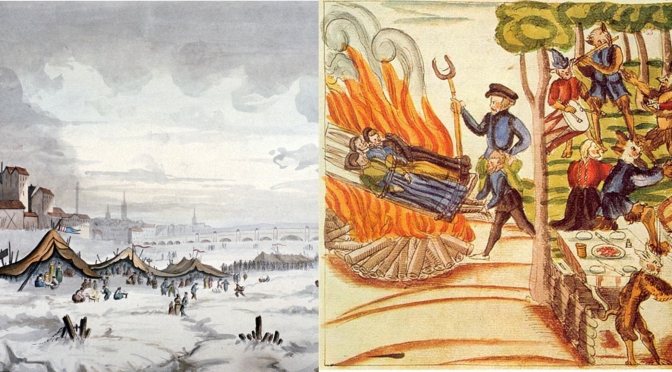 The forests are stripped of their leaves, the earth lies frozen, the rivers are frozen with the cold. And fog and rain, together with the excess of endless nights, have robbed the earth of its joy.

The time period now commonly agreed—by historians and climate scientists alike—to be the ‘Little Ice Age’ lasted from between 1300 and 1850 A.D. The cooling was only slight (ranging from 2-5°C, depending on the region), but it was enough to slam Europe, and much of the Northern Hemisphere, into a climate event that saw unprecedented storms, unseasonal frosts, and ruined crops. “This decrease was large enough to leave Iceland completely surrounded by ice and to freeze the Thames in England and the canals in Holland routinely—both otherwise unheard-of events.” (Oster 218)

While there was a general cooling over the course of this 500-year period, there were two cold snaps in the 16th and 17th centuries that further strained hardship to the breaking point. Here I have gathered the research of economists, meteorologists, and historians to tell the story of the Little Ice Age and how people offered up their neighbours for slaughter in the hopes of a summer that would never come.